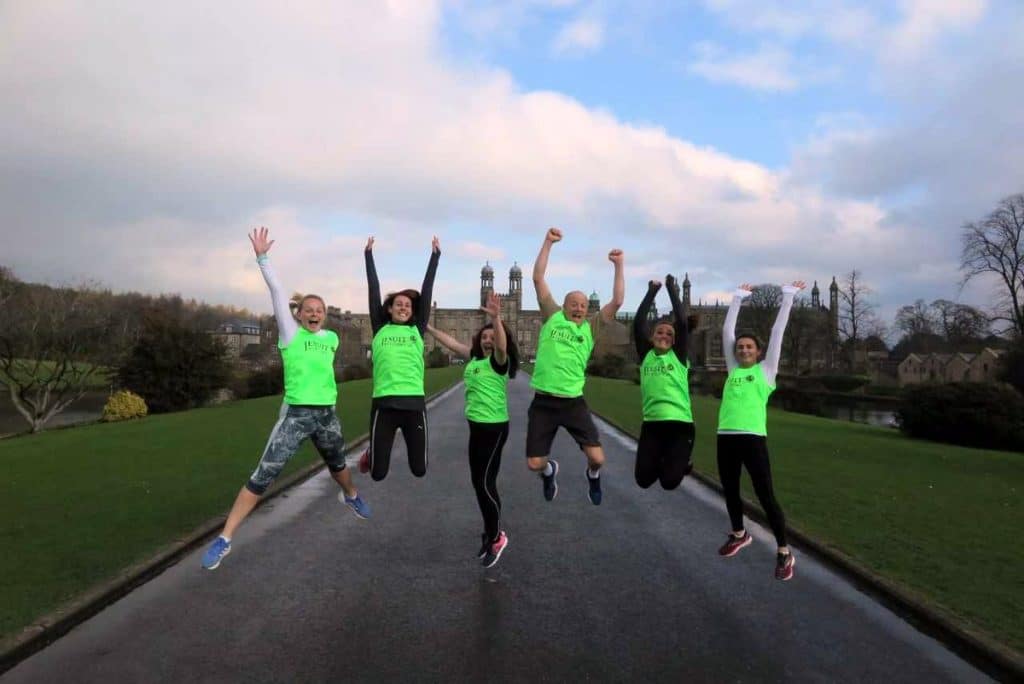 Last weekend I visited Stonyhurst College in Lancashire to give a parish appeal for Jesuit Missions. As this had been planned a while, I originally thought that it would be a great opportunity to join the “Stonyhurst Sprinters” for a long run as part of our marathon training, whilst taking in the beautiful Ribble Valley.

However, this was before I had to stop running in February due to an ongoing Achilles problem. I am now back on track with my training, if a little bit behind schedule! When I got in touch with the runners to say I would be coming up to visit, Jules Greenwood, Stonyhurst Religious Studies teacher, seemed to be in the same situation. She had also been struggling with injury and hadn’t had the chance to reach the longer runs. She said, “I have now resigned to the fact that the marathon will not be competitive in any way, but rather an emotional and enjoyable day, albeit the run will be a massive hurdle!”

After the school mass at St Peter’s, Jules took me on a 5km run around the grounds and through the village of Hurst Green before finishing down the famous avenue leading back to the college just in time to sneak into the end of brunch.

Jules said that she and two of the other Stonyhurst Sprinters, Jill and Louise, used to regularly run this 5km loop in their lunch breaks. She said, “We would come out in all weathers, even hail, just to get some fresh air!” It was this lunch group that gave Fr Tim Curtis the idea to sign up the runners after he ran the marathon some years ago.

Finding the time to fit in training for a marathon can be hard for anyone, so I was interested to know how a teacher who is also a live-in pastoral head could fit it in. Jules told me,

“Friday’s are my days off so each Friday I try to run along the Blackpool promenade with Louise, another Stonyhurst Sprinter who is also from Blackpool. The training has definitely taken over my life, all my free time is now used for running.”

Jesuit Missions staff members Teresa and Lynn recently visited Stonyhurst St Mary’s Hall and St Joseph’s Hurst Green primary schools to talk about Caring for our Common Home and used Jesuit Missions Womble mascots to help teach the students about recycling. The Stonyhurst staff said that they have been able to use the wombles to raise their profile as Jesuit Missions marathon runners within the school.

This year each member of Jesuit Missions London marathon team is running in memory of Fr Victor-Luke SJ, who was tragically killed while serving in South Sudan last November.

There are six Stonyhurst teachers taking on the challenge for Jesuit Missions. You can support the Stonyhurst Sprinters team by visiting their fundraising page here.